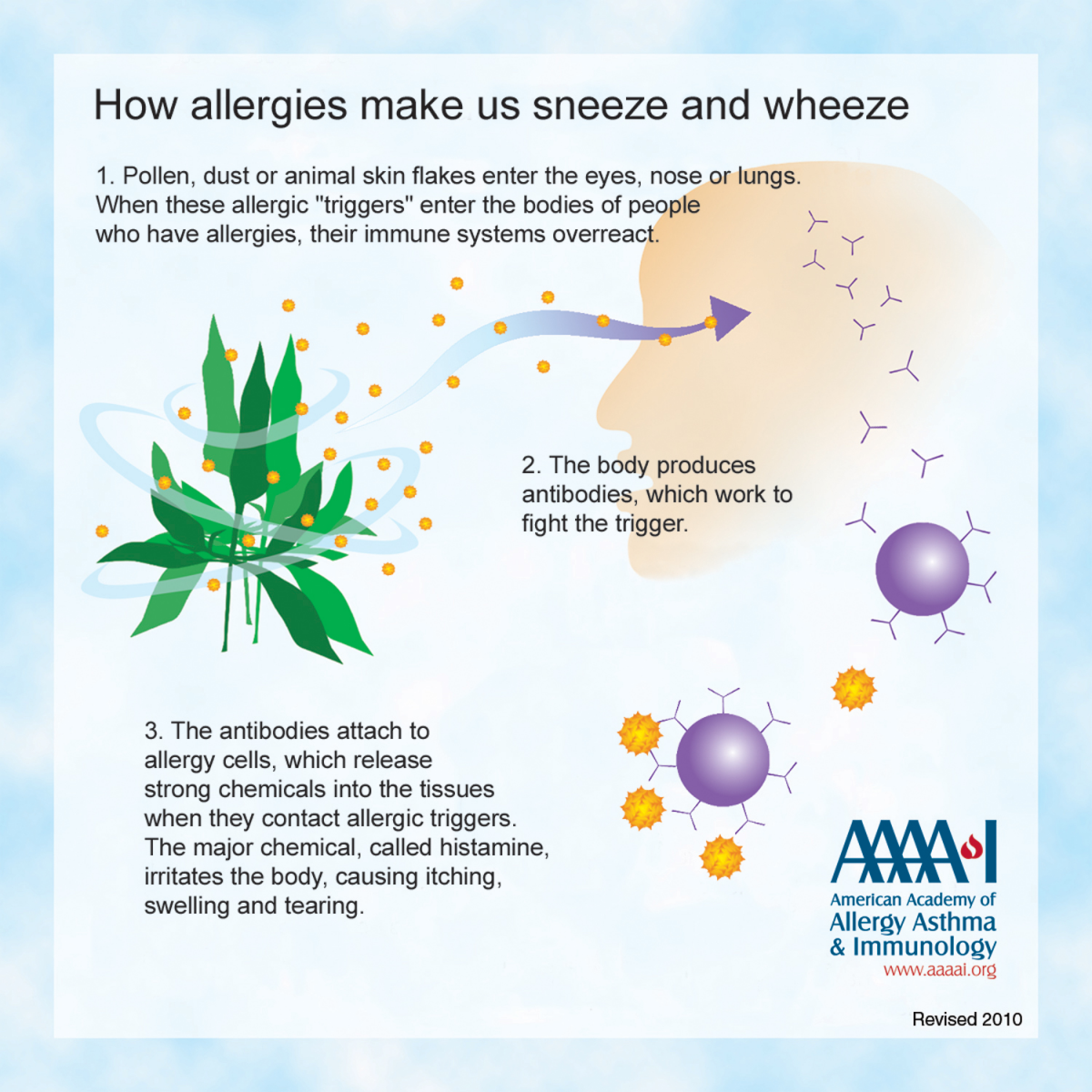 Allergy - Allergies are inappropriate or exaggerated reactions of the immune system to substances that, in the majority of people, cause no symptoms. Symptoms of allergic diseases may be caused by exposure of the skin to a chemical, of the respiratory system to particles of dust or pollen (or other substances), or of the stomach and intestines to a particular food.

Allergen Immunotherapy - Allergen Immunotherapy ("allergy shots") is a form of preventive and anti-inflammatory treatment of allergy to substances such as pollens, house dust mites, stinging insect venom, etc. Immunotherapy involves giving gradually increasing doses of the substance, or allergen, to which the person is allergic. The incremental increases of the allergen cause the immune system to become less sensitive to the substance, perhaps by causing the production of a particular "blocking" antibody, which reduces the symptoms of allergy when the substances are encountered in the future.

Anaphylaxis - Anaphylaxis, or anaphylactic shock, is a severe, frightening and life-threatening allergic reaction. This reaction, although rare, can occur after an insect sting or as a reaction to an injected drug - for example, penicillin. Less commonly, the reaction occurs after a particular food or drug has been taken by mouth.

Antihistamine drugs - Antihistamines are a group of drugs that block the effects of histamine, a chemical released in body fluids during an allergic reaction. In rhinitis, antihistamines reduce itching, sneezing, and runny nose.

Asthma - Asthma is a chronic, inflammatory lung disease characterized by recurrent breathing problems. People with asthma may have acute episodes when the air passages in their lungs get narrower, and breathing becomes more difficult. Sometimes episodes of asthma are triggered by allergens, although infection, exercise, cold air, and other factors are also important triggers.

Bronchodilator drugs - Bronchodilators, such as albuterol, are a group of drugs that widen the airways in the lungs. These medications work quickly, within hours or minutes, to open up the breathing passages.

Contact dermatitis - Contact dermatitis is an inflammation of the skin or a rash caused by contact with various substances (chemical, animal or vegetable in nature). The reaction may be an immunologic response or a direct toxic effect of the substance. Among the more common causes of a contact dermatitis reactions are detergents left on washed clothes, nickel (in watch straps, bracelets, and necklaces, etc.), chemicals in rubber gloves and condoms, certain cosmetics, plants such as poison ivy, and topical medications.

Corticosteroid drugs - Corticosteroids are a group of anti-inflammatory drugs similar to the natural corticosteroid hormones produced by the cortex of the adrenal glands. Among the disorders that often improve with corticosteroid treatment include asthma, allergic rhinitis, eczema, and rheumatoid arthritis. Inhaled corticosteroid medications must be taken on a routine basis, as they need some time to reach optimal effectiveness.

Eczema - An inflammation of the skin, usually causing itching and sometimes accompanied by crusting, scaling or blisters. A type of eczema often made worse by allergen exposure is termed "atopic dermatitis".

Histamine - Histamine is a chemical present in cells throughout the body that is released during an allergic reaction. Histamine is one of the substances responsible for the symptoms of inflammation and is the major reason for the running of the nose, sneezing, and itching in allergic rhinitis. It also stimulates the production of acid by the stomach and narrows the bronchi or airways in the lungs.

Inflammation - Inflammation is the redness, swelling, heat, and pain in a tissue due to chemical or physical injury, or to infection. It is a characteristic of allergic reactions in the nose, lungs, and skin.

Rhinitis - Rhinitis is an inflammation of the mucous membrane that lines the nose, often due to an allergy to pollen, dust or other airborne substances. Seasonal allergic rhinitis also is known as "hay fever," a disorder which causes sneezing, itching, a runny nose, and nasal congestion.

Sinus - The sinuses (paranasal sinuses) are air cavities within the facial bones. They are lined by mucous membranes similar to those in other parts of the airways.

Sinusitis - Sinusitis is inflammation of the membrane lining the facial sinuses, often caused by a bacterial or viral infection.

Urticaria - Urticaria is a skin condition, commonly known as hives, characterized by the development of itchy, raised bumps surrounded by an area of redness.